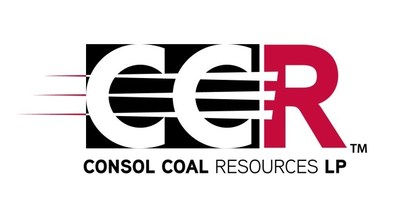 "While commodity markets have been under pressure since the beginning of 2019, I am pleased to announce that the CCR team continues to deliver strong operating and financial performance," said Jimmy Brock, Chief Executive Officer of CONSOL Coal Resources GP LLC, the general partner of the Partnership. "Our results for the first half of 2019 demonstrate the effectiveness of our strategy, which is based on a stable customer base, consistent operations and financial sustainability. For the second quarter, on the marketing front, even while PJM West power prices and prompt export thermal coal prices declined more than 25% compared to the year-ago period, we were less affected due to our contracted portfolio position and solid customer base. On the operational front, we had another robust production quarter providing consistent shipments to our customers. On the financial front, we generated a distribution coverage ratio of 1.2x and continued to provide an attractive distribution yield to our unitholders."

"On the safety front, the Pennsylvania Mining Complex (PAMC) employees improved their safety performance, as measured by number of incidents, by 30% compared to the same period in 2018. The central preparation plant continued its strong safety performance with an incident-free quarter."

During the quarter, we were successful in securing additional contracts for 2020 and 2021 coal sales bringing our contracted positions to 80% and 34%, respectively, assuming a 6.75 million ton annual run rate. During the second quarter, one of our longwalls also transitioned to a lower sulfur region of the mine plan at PAMC. We believe this will provide us with additional quality improvements that should help to increase the domestic and export marketability of the PAMC product, including access to newer markets.

According to the U.S. Energy Information Administration, inventories at domestic utilities stood at approximately 115 million tons at the end of May, down by more than 10% from year-ago levels. While low natural gas and power prices weighed on broader coal demand, we continued to ship all we could produce during the second quarter, highlighting the quality and resilience of our customer base. Looking forward, as mines and railroads return from their annual maintenance shutdown period, we expect demand for our domestic contracted tonnage to remain steady. With summer weather now upon most of the nation and the National Oceanic and Atmospheric Administration predicting warmer-than-normal conditions through the fall across the coasts, we expect that cooling demand will help support electricity demand, which will continue to keep coal stockpiles at relatively low levels.

On the export front, API2 spot prices for export thermal coal declined by approximately 44% during the first six months of 2019. Our revenues were largely unaffected due to our previously disclosed export contract, which runs through December 2020 and has fixed volumes with collared prices, that nets us a floor price per ton above $45.52. While spot export prices remain depressed, we continue to see strong demand from Asia. As mentioned in our previous release, approximately 111 GW of new coal-fired capacity is under construction globally for commissioning between 2019-2024. Furthermore, an additional 300 GW of new coal-fired capacity is in the planning stages. We believe this bodes well for sea-borne thermal coal demand, particularly for high-Btu NAPP coal, and we will remain opportunistic in our contracting strategy to maintain a stable earnings profile at PAMC for our shareholders.

CCR achieved a second quarter production of 1.8 million tons, which compares to 1.9 million tons in the second quarter of 2018. The decline in coal production was due to the impact of an additional longwall move in 2Q19 and slower start-up of the longwall after the move. At our Harvey mine, we set a new quarterly production record of 384 thousand tons.

Total costs during the second quarter were $75.3 million compared to $78.7 million in the year-ago quarter. Average cash cost of coal sold per ton1 was $31.07 compared to $26.99 in the year-ago quarter. The impairment to cost per ton was largely driven by lower fixed cost leverage, higher mine maintenance cost and project expense. Since the fourth quarter of 2017, we have seen inflation in the cost of supplies that contain steel and other commodities. However, with steel prices declining, we expect to see some relief as some of our supply contracts reset. We have been successful in managing these cost pressures and keeping our overall cost increases within our annual guidance range.

During the second quarter of 2019, CCR generated net cash provided by operating activities of $21.9 million and distributable cash flow1 of $16.8 million, yielding a distribution coverage ratio1 of 1.2x. During the quarter, our net cash provided by operating activities was impacted by lower net income and an increase in working capital. Our distribution coverage ratio calculation is based on estimated maintenance capital expenditures of $9.0 million, while our actual cash maintenance capital expenditures for the second quarter were $10.0 million. Based on our current outlook for the coal markets and a year-to-date distribution coverage ratio1 of 1.2x, the board of directors of the general partner has elected to pay a cash distribution of $0.5125 per unit to all limited partner unitholders and the holder of the general partner interest. As previously announced on July 25, 2019, the distribution to all unitholders of the Partnership will be made on August 15, 2019, to such holders of record at the close of business on August 8, 2019. We also announced that upon payment of the second-quarter distribution, the financial tests required for conversion of all of the CCR subordinated units, which are owned by CONSOL Energy, Inc., will have been met. Accordingly, the subordinated units will convert into common units on a one-for-one basis effective August 16, 2019, the first business day following the payment of the second-quarter distribution.

Based on our year-to-date results, current contracted position, estimated prices and production plans, please find below our financial and operating performance guidance for 2019.

A joint conference call and webcast with CONSOL Energy Inc., during which management will discuss the second quarter 2019 financial and operational results, is scheduled for August 6, 2019 at 11:00 AM ET. Prepared remarks by members of management will be followed by a question and answer session. Interested parties may listen via webcast on the Events page of our website, www.ccrlp.com. An archive of the webcast will be available for 30 days after the event.

We will also file our Form 10-Q with the Securities and Exchange Commission (SEC), reporting our results for the quarter and six months ended June 30, 2019. Investors seeking our detailed financial statements can refer to the Form 10-Q once it has been filed with the SEC.

1 "adjusted EBITDA", "distribution coverage ratio", "distributable cash flow", "average cash cost of coal sold per ton", "average cash margin per ton sold" and "net leverage ratio" are non-GAAP financial measures, which are reconciled to the most directly comparable GAAP financial measures immediately below the caption "Reconciliation of Non-GAAP Financial Measures".
2 CCR is unable to provide a reconciliation of adjusted EBITDA guidance to net income or average cash cost of coal sold per ton guidance to total costs, the most comparable financial measures calculated in accordance with GAAP, due to the unknown effect, timing and potential significance of certain income statement items.